Pinch, punch first of the month and we were off to Dong Hoi on the train, for a change. We had gone for the cheapest option, 3rd class, hard seats. Try to imagine sitting on a wooden park bench for four hours and you will get an idea of the experience. Once again the company was very good, but boy did I have a numb bum by the time we arrived in Dong Hoi!! 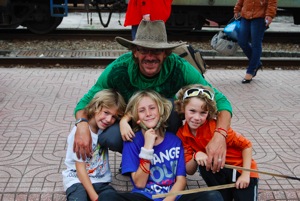 We found a nice hotel near the river and settled ourselves in before our customary exploration of the local area. We passed the market which was vibrant and every possible parking space was taken with motorbikes. As we headed away from the river the boys were transfixed by a man fixing shoes…

and eventually we were able to carry on our walk, past the restored gate to the citadel 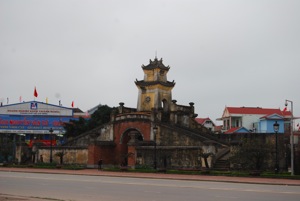 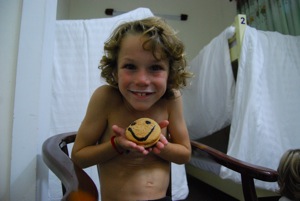 Finding somewhere to eat was a bit of a challenge but we went with the advice from the hotel staff and enjoyed some excellent pancakes, Dong Hoi style.

After a fairly lazy morning we organised a car and driver through the hotel to take us to Vinh Moc tunnels.This system of tunnels was built by the villagers of Vinh Moc, who having been suspected of helping the North Vietnamese during the “American” war, were bombed on a fairly regular basis by the US in an attempt to disrupt supply lines and to force the villagers to leave the area. Since they had no place else to go, they decided to move underground.

Over the course of 6 years (from 1966 to 1972) they dug tunnels first at 10m then 18m and then 27m. Around 90 families lived in the tunnels when the Americans were bombing, the longest time they were down there being 10 days and 10 nights. At least 17 children were born down in the tunnels which was equipped with family quarters, kitchens, hospital and maternity rooms.

We had the chance to be shown around by the caretaker of the museum. He had himself been born in the tunnels and was unable to speak, but he communicated by gestures and the look of glee on his face when we understood was truly a joy to behold. The tunnels were just about high enough for Tania, but I was bent over most of the time – the kids were in their element! I could not help but be amazed by the ingenuity and engineering skills of these village folk who had carved these tunnels out of the clay soil in order to survive, and survive they did suffering not one single casualty. 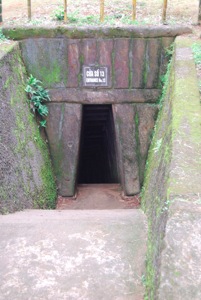 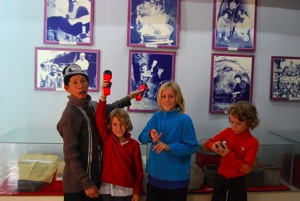 The last photo shows their communal area where they would come together to sing and dance.

It was truly extraordinary to explore these tunnels and experience momentarily how life was for the villagers during the war. The caretaker was fascinated by our wind-up torches and so we gave him one in addition to some money to say thank you for making the experience such a special one. And with that we rejoined our car and headed back to Dong Hoi for dinner and bed.

Today we were off to explore some caves, not just any caves but some of the largest caves in if not the world, certainly Vietnam. As they were a good distance away from Dong Hoi we rented scooters from the hotel and donning our helmets we set off along highway 1.

Arriving at the jetty for the boats to the cave we were fortunate to encounter a group of travellers from the Phong Nah farm stay and their erstwhile leader (and farm stay owner) negotiated a price for us all to get a boat to see the caves. 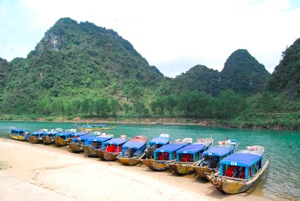 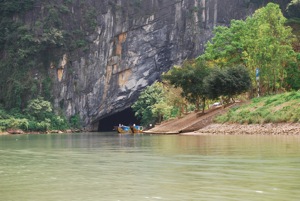 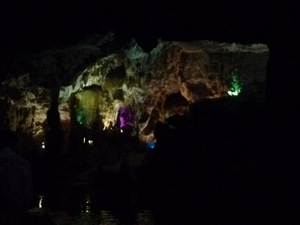 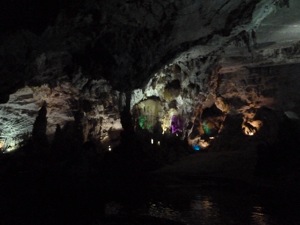 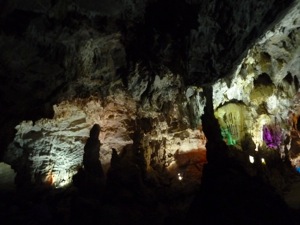 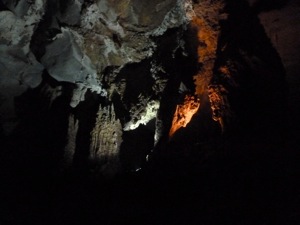 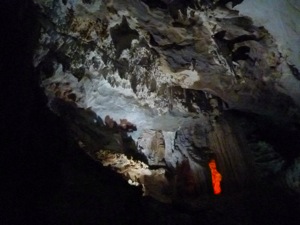 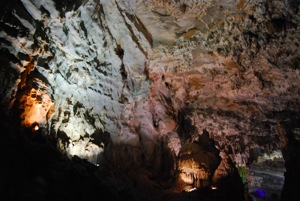 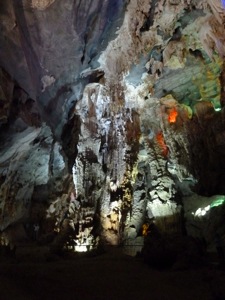 Now, the cave was amazing. A wet cave only accessible by boat, but with a couple of landing stages so we could disembark for an exploration. It is 44.5km long at present, but only 1.5km is accessible to the general public, and as you can see it is rather garishly lit – allegedly this is so that Vietnamese visitors will come and see it; if it was only lit in white light, it would not be exciting enough for them!

Returning to the boat jetty we got the scooters and headed off to the newly opened Paradise Cave. Discovered in 2005, after much excavation and preparation for tourist access, it was finally opened as an attraction in September 2011 and is said to be the longest dry cave in Asia. To get to it we had to carry on along highway 1 and then double back along a small road through towering hills peppered with limestone caves poking out of the mist. We passed some locals who waved at us, and weaved our way past herds of buffalo being herded along the road. 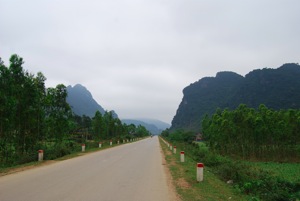 All too soon we arrived at the entrance to the cave park – a large car park from which we walked to the ticket booth. There, we were told we had another 2km to the start of the ascent to the cave (some 500 steps), but that if we didn’t want to walk there were some golf carts that would take you there and back. Short of time we opted for the carts and we were driven at breakneck speed along the winding road to the start of the steps. After that, we made our way steadily up the 500 steps and were presented with a small opening in the rock face.

Plunging into the darkness we descended the wooden steps and after just a few we were presented with a cavernous, humungous space that made us stop and stare. 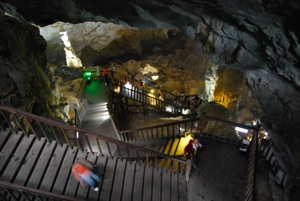 And as we went down further we arrived at a viewing platform and it was then that we really got the full scope of this phenomenal cave. The entrance cave was big, but this was massive, gigantic, and it stretched on and on into the distance. 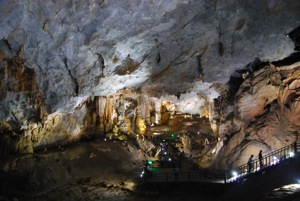 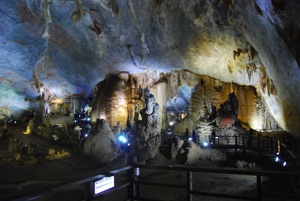 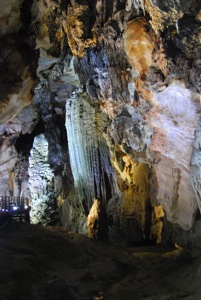 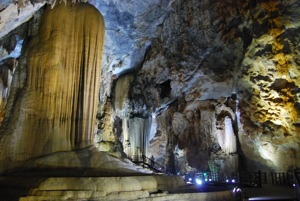 It is difficult to sum up the scale and majesty of this place, it was truly staggering.

We left the cave and as we set off back towards Dong Hoi the mist closed in and when we reached the highway the light faded and night fell. Fortunately the road is not that busy, however we did have one scary moment when a man on a motorbike carrying a 4m plank of wood over his shoulder came out of a side road, his plank across both carriageways. We frantically hooted our horns and he changed course to allow us to pass. Other than that we had little to worry us, save almost running out of petrol, and we made it back to Dong Hoi unscathed.

We had nothing in particular planned for today other than catching the night bus to Ninh Binh so we lazed about for most of the day and even took a walk along to the beach in the north of the city. It was pretty grotty with plastic bottles, old carpets and food containers and the odd dead dog. I guess this part of the town is not renowned for its beach, although it could have been nice.

As we walked along, the mist rolled in and out adding a chill to the air. We headed back to the hotel and Tania spotted a very large shell with a tail, which turned out to be the remains of a horseshoe crab. Not something you see every day and it amazed the kids! 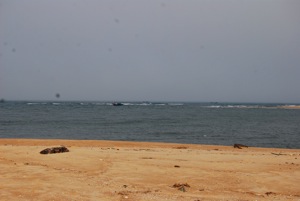 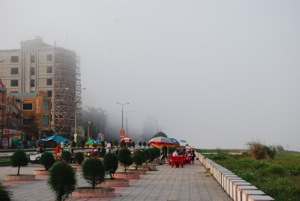 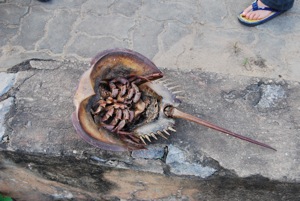 We passed the hotel and continued to the ruined church as the sun began to set behind it, a wonderful photo op not to be missed. 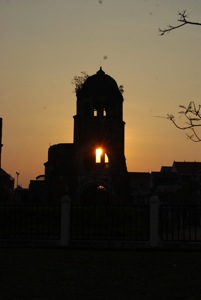 As 8pm arrived we headed up to the travel agents and waited for the bus, which arrived ½ an hour late, and we were soon aboard the cramped space. Probably the worst sleeper bus we had been on, there was not enough space in the cocoon for me to have my feet upright, and with the crazy bus driver we were scared of being tipped out of our bunks, so we all bagged a bed on the ground floor.

Sweet dreams, and try to forget the feeling that it may be the last journey we ever do!! When we awake we will be in Ninh Binh to witness what has been described as the Halong Bay on dry land.

This entry was posted on March 29, 2012, 11:54 am and is filed under Jon, Vietnam. You can follow any responses to this entry through RSS 2.0. You can skip to the end and leave a response. Pinging is currently not allowed.