Slightly hungover and a little tired we finished packing and after a short taxi ride arrived at Hoi An bus station to take our sleeper bus to Hué. Slightly odd that a day bus was a sleeper, but in the end a God send as we were able to recline and catch forty winks on the Sinh Tourist bus.

The journey was uneventful and we arrived in Hué, ancient capital and seat of emperors. We pulled up at the Sinh Tourist office in the centre, right next door to a French bakery and café and before doing anything else we deposited ourselves inside the café for a very late breakfast and some croissants, pain au chocolat, croque monsieur and coffee.

After filling our tummies we walked a short distance to Jade hotel, a wonderful place… warm, welcoming and filled with little touches that make the customer experience better than the average place we’ve stayed in.

We settled in nicely, but we were a little disappointed that we could only stay for one night. So part of the afternoon was spent searching out another place, which we eventually found just around the corner, and it had a swimming pool! More of that later.

Jade hotel is not far from the main “tourist” restaurant and bar strip and so we ate close by and then hit the sack early-ish to compensate for the previous night’s debauchery!!

As is customary for us in a new place, we like to explore on foot. Hué was no exception. So after moving to our new hotel we set off along the river to the bridge across to the citadel. 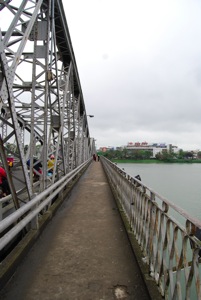 and then, once on the other side it was running the gauntlet of cyclo drivers – “You want cyclo? One hour, very cheap”. Ermmm, no thanks we have legs!. We were then followed for 5 mins by a very persistent one who told us that the citadel was closed until 13:30 and that he would take us around the walls for an hour. Hmmmm? Beard-stroking likely story! We eschewed his proposition and carried on, stumbling across yet another war museum of abandoned/captured US military equipment on our way to the citadel gate. 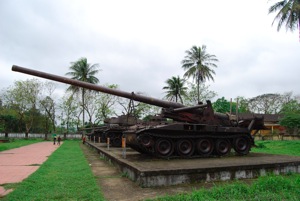 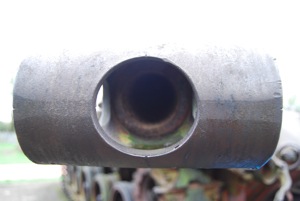 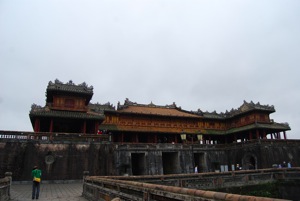 The left and right wings housed a giant bell and a giant drum and the centre part would have been where the emperor watched the processions in the square opposite and given speeches from.

We left the Ngo Gate and entered the main citadel arriving at the throne room where we surreptitiously took some photos and behind which were some video presentations of how it would have looked in its heyday and some scale models of the citadel before it was bombed to hell and back! 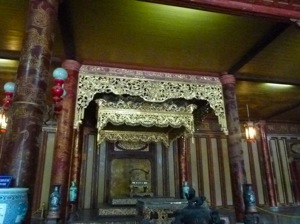 And then onto the private heart of the citadel where there was little left but you could get the impression of its grandeur. The last emperor was a sports fan, and the establishment has seen fit to reconstruct the tennis court that was there before, for the benefit of the tourists…. errrmm, what? 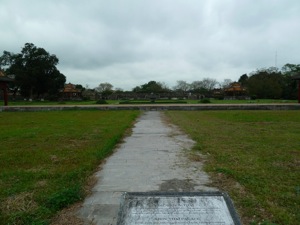 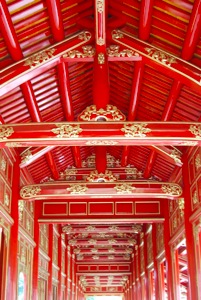 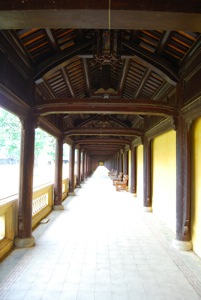 We wandered through the Royal Quarters and out of the back gate to find a little place to eat before returning to visit the other side of the compound where we found the theatre. Here they still perform traditional plays and dancing and it was richly decorated and by the stage were racks of traditional costumes.

We left the citadel and inspected the canon – no visit to an ancient site is complete without seeing some canon!! 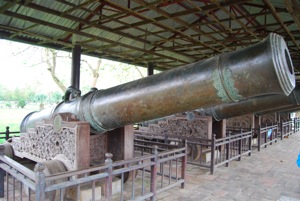 And then it was farewell to the emperors last dwelling place and back to the hotel for a swim. Given that the weather was decidedly nippy and had been for some time, the pool temperature was close to freezing and it was some very shocked young men that jumped in, and quickly made for an exit – it did make me laugh though! They just wouldn’t be told :o)

We had a nice dinner in the dining quarter and headed off to bed. A great day, most enjoyable.

One of the given results of being a centre of an empire is that there will be one or two former kings or emperors buried there. Around Hué are a multitude of tombs ranging from the simple to the magnificent – the last emperors being constructed in a kind of gothic style. One simply cannot visit this city without seeing a tomb or two. And so our plan was to see some modest places of internment today and first on the agenda was to rent some scooters.

Near the hotel was a travel agency that also rented bikes and so we kitted ourselves out with bikes and helmets and they lent us a map so we could find our way – well approximate our way at the least.

First up was Thien Mu Pagoda. Built in 1601 on the banks of the Perfume River, legend has it that an old lady appeared on the hillside and said the lord would come and build a pagoda for the prosperity of the country, and on hearing this, Lord Nguyen Hoang ordered its construction. It is octagonal in shape and has seven levels, and near the entrance gate stand huge wooden statues of temple guardians complete with real facial hair. In the tranquil gardens behind stands an old car, a memorial to the monk Thich Quang Duc who drove in it to Saigon and then set himself on fire in protest against the regimes violence against religious freedom, complete with a reproduction of the award winning photo of the event in the background. 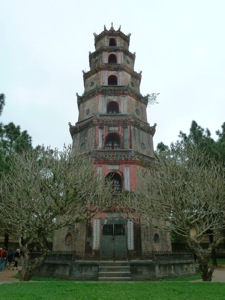 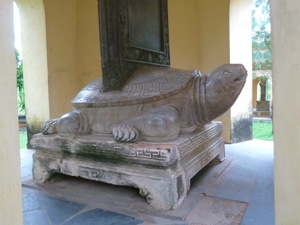 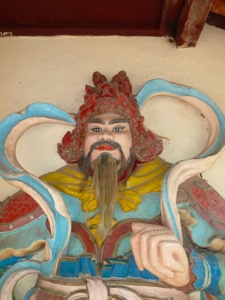 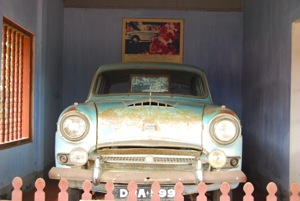 To the left of the gardens stands a vast cemetery, but the kids were more interested in the tree stumps with holes in it as was the monk with the camera!

We left the pagoda and headed back into town. As we crossed the railway tracks we turned immediately right where the railway bridge had a two lane walkway that served as a crossing point for motos. Just a few inches wider than the wing mirrors we had a fun trip across the river trying to steer straight with 3 lively kids on the back!!

Eventually we found our next destination, the tomb of Tu Duc – perhaps one of the most magnificent tombs around Hué. It was certainly extremely expensive and needed thousands of men to dig the ponds and divert the river running through the spot, not to mention construct all of the buildings. One of the oddities of these tombs is that the emperors actually used them before they passed away and they all seem to feature rest areas for reflection and poetry as well as living quarters for the family and the concubines!!! 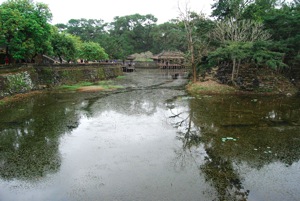 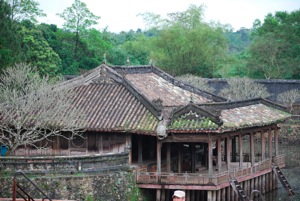 Finally, you arrive and the honour courtyard featuring statues of mandarins and horses and elephants before passing through to the tomb itself. 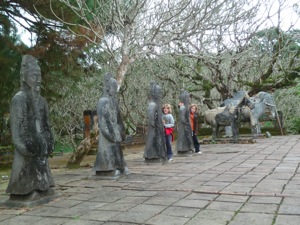 After Tu Duc we drove back towards town stopping at the Nam Giao Esplanade. A three-tiered construction, this was the place where the emperor would come to fast for three days before sacrificing animals. The lowest, square terrace represents humanity, and the round 2nd terrace represents the earth and the top most represents heaven. There are just three flat terraces now, but you can still see the post holes that would have given another dimension to the site. All we know is that it was a great place to play Harry Potter and apparating and disaparating!! 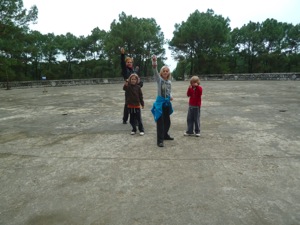 Braving the rush hour traffic we headed back into town and managed to find our hotel again – thank you Zen and the Art of Navigation once again. Simple dinner – I think it was Italian this time and then off to bed. The motorbikes overnighted outside the travel agent with ¾ of a tank of fuel – take note, it is important for tomorrow!

Next day we collected the scooters and were rather surprised to only find ½ a tank of fuel. Strange, we thought, there was ¾ yesterday. We remonstrated with the agents but to no avail; either they had been used by the staff or some of the petrol had been syphoned, we’ll never know – but it was a poor start to the day!

Shrugging it off we set off towards the tomb of Minh Mang, described as being perhaps the most majestic of all the royal tombs. As we rode along, a lady pulled up along side me and offered to show us the way to the tomb and afterwards a chance to come back to her home. We duly arrived via a back road that led along the river past dwellings scattered amongst the trees. Tania and I exchanged a few looks wondering what awaited us, but we pulled up in front of the tomb as promise.

Paying the entrance fee, the lady waited outside whilst we entered and explored the vast site. It was built between 1841 and 1843 after the death of the emperor and is renowned for its architecture. It was certainly striking, calm and peaceful. 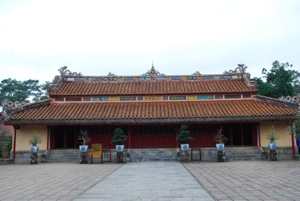 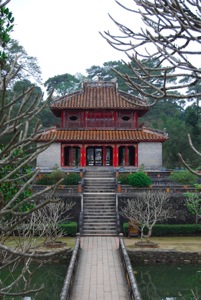 The tomb was behind a closed door, only opened on the anniversary of the emperor’s death, the tomb inside a large hill that was sealed once the body had been interred. We speculated where the entrance to the tomb was and imagined that it was somewhere under the steps that led up to the door, but we’ll never know.

We rejoined the lady guide who took us to her home. We received some green tea and chatted for a while before we made to leave telling her that we needed food. She offered to cook us something and we were excited that we would get some authentic home cooked Vietnamese food. Instead she sent her son out for some instant noodles. We were disappointed to say the least, but more so when she asked us to pay 100,000 dong for the meal. It was upsetting for us all, and Tania was particularly unhappy with the deception. We knew that we would pay her some money for the guide services, for her sons education and we were more than happy to help out, but the meal left us feeling a little cheated.

We left under a cloud, and steered a course for the tomb of Khai Dinh, the penultimate emperor of Vietnam who reigned from 1916-1925 and was largely considered a puppet of the French. The construction of his tomb took 11 years which was 2 years longer than his reign! The architecture is heavily influenced by europe and the outer walls are covered in blackened concrete that lends a gothic air to the place. Inside is a riot of colour reminiscent of Versailles or English country homes. 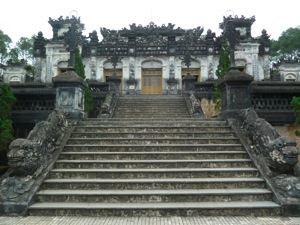 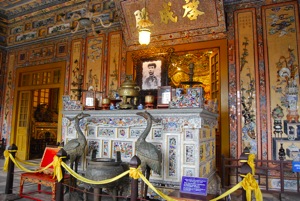 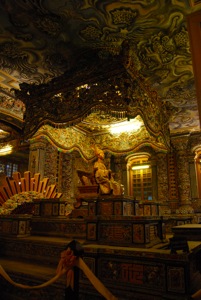 We bade farewell to the tombs of Hué and made tracks for the hotel to pack up our things ready for the journey to Dong Hoi the next day.

This entry was posted on March 28, 2012, 3:03 pm and is filed under Jon, Vietnam. You can follow any responses to this entry through RSS 2.0. You can skip to the end and leave a response. Pinging is currently not allowed.