Oh no it is far too early!

6am breakfast and then tuk-tuk into town to the bus company office. We loaded all the gear onto the minibus and then we were off to the bus station to transfer to another bus. Joining mostly locals, we set off at last on the long road to Kampung Cham. Flat countryside, several comfort stops and the ever present food hall stop where everything costs double.

Finally we arrived and in the blazing heat and after fending off the pushy motorbike taxis and tuk-tuks we set off on foot towards the Mekong – well eventually, our first path took us in completely the opposite direction. Following the road we pitched up in the shadow of a large building and dumping our bags we looked around to get our bearings and to check out the hotels. The building that was providing us with shade turned out to be the Mekong Hotel (which we had been looking for) and we checked into a large room with a view of the back yard rather than the mekong itself.

As the day faded to night we exited the hotel and took a stroll along the banks of the mighty Mekong. 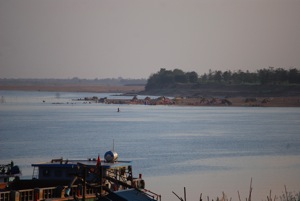 Then it was a bite to eat and back to the hotel for some rest.

The plan for today was to cross the Bamboo Bridge to the island of Koh Paen which lies in the middle of the Mekong just a kilometre from our hotel. We had glimpsed this marvellous structure from afar the previous evening. Some facts…. it is made entirely from bamboo (er, obviously); it is rebuilt at the start of every dry season; it is washed away every wet season; it is strong enough to carry small lorries and cars.

So after some excellent, if expensive breakfast at the Smile Café, an establishment run by the Buddhism and Society Devlopment Organisation, we negotiated the rental of some bikes from the hotel – only three this time, and set off to see the bridge. The photos are from yesterday and in the second one you can see people swimming and enjoying the beach area exposed during the dry season.

It was quite a toil in the heat to cycle to the bridge, even though the road was pretty flat. As we approached the bridge there was no obvious entrance or starting point – using some Zen and the Art of Navigation we followed a moto into a side road made in the sand, which descended steeply to the river, but did indeed find the start of the bridge. A small sign on the bridge said all users had to pay, but it neglected to post any toll prices. 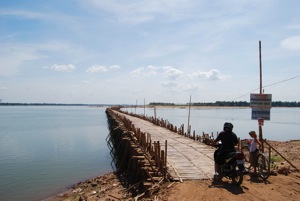 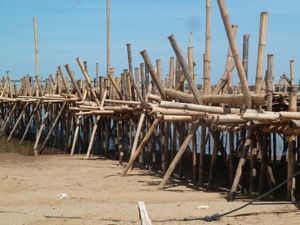 As we cycled across the bridge, the surface dipped slightly under our weight with the effect that it was as if we were riding through sand. However, the amount of dipping was nothing compared to that which occurred as the cars passed. In the last photo above you can see a Range Rover coming over the bridge and its tyres sank a good 6 in (15cm) into the deck – there was a look of mild panic on the drivers face as she pulled over to one side to let us past.

Safely negotiating the length we arrived at the toll booth where we were charged a fortune for crossing both ways. We argued strongly that this surely could not be the toll as the locals crossed every day and it would ruin them, but the man produced an “official” ticket book that showed the price clearly marked. No choice but to pay, ah well.

We carried on following the bamboo road across the sand dunes and up a small rise. From then on it was a dirt/sand path through shady trees along the seemingly never ending one street island. We passed traditional and new buildings on both sides of the street. The people were friendly and welcoming, and as and when we stopped for a break, or to replenish our water, we were instantly the centre of attention as people from houses all around came to see us and to have stilted conversations in English, Viet and sign language. They were happy, warm hearted and welcoming and it was a real pleasure to meet them.

After what seemed like 20kms (but was probably only 2 or 3) we had still not come to the end of this island, and so we turned around and headed back to the bridge, and more importantly the beach area for a swim in the mighty Mekong river. The boys (including me) stripping to our boxers, and T respectful and respectable as ever swimming fully clothed. 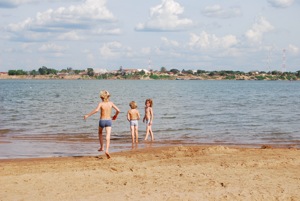 It was shallow for a good 20m before there was any sort of depth to swim in. All around us children of all ages cavorted in the river, horsing around in the same way that children do everywhere in the world. It felt great to be in the water, refreshing after the heat of the day and the work of the cycling.

After a good hour or so of splashing we headed back across the bridge to the hotel for a shower and food and then bed. The sun kindly making a nice photo opportunity as it sunk behind the horizon… 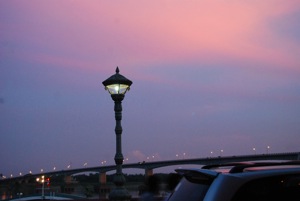 Packing, breakfast, and then walk through the heat to the bus station for our hop to Kratie (pronounced Kra-Chi). 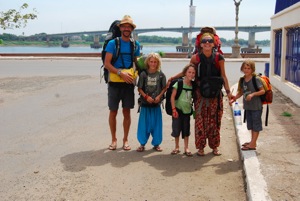 Another 4 or 5 hours on a bus with the usual stops. This time the journey was soured by an argument with a young French couple who were in the seats in front of us. Alerting us to the fact that the children had dropped crumbs on the floor deliberately and then stood on them, they then raged about how our children behaved like animals. We were surprised as they had actually been pretty well behaved, and there followed a heated exchange in the French style which resolved nothing and left a bad taste in the mouth. Thankfully, they were not staying in our hotel, nor did we see them again save for one brief insignificant moment as we were waiting for our tuk-tuk man.

As the sun set we approached Kratie and we managed to grab some blurred photos from the speeding bus window. 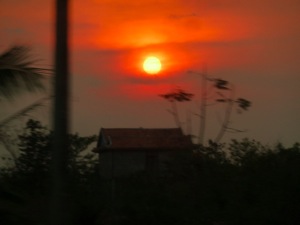 We arrived pretty much in the centre of the town, and after recovering all our bags, set off to look for a room. Arriving at an impressively large place on the riverfront called Santepheap Hotel we checked into a room with 2 double beds and en suite for a reasonable amount per night.

We wandered around the neighbourhood to get our bearings and to find a place to eat. On returning to the hotel, the man at the desk asked about our plans and then started the sales pitch. We were intending to head to the mountains for a few days, but whilst here in Kratie we had some dolphin spotting to do, so we at least let him arrange for a tuk-tuk man for the next day.

Today was a day of great excitement. The tuk-tuk man arrived at 9am and we loaded up for the 15km trip up river to Kampi. The road follows the river and passes through towns and villages full of traditional houses on stilts and on this trip truckloads of the party faithful on what I can only assume was a grand day out. At one point we were stuck in a traffic jam as they stopped for something or other, and we had the chance to talk with some local vendors selling the traditional sticky rice with sweet red beans loaded and then steamed in a bamboo stick. They kindly offered us one and we tucked in – it was pretty tasty. 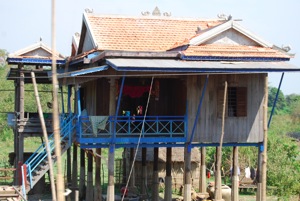 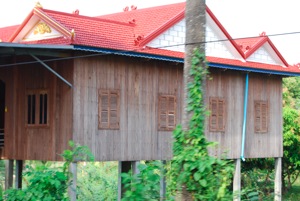 After a bumpy ride we arrived at the Dolphin site and paid our fee which included the boat and boatman. Our man was pretty friendly though he did not speak any English. He was tenacious and stuck at the job of finding the dolphins. For a good hour we sped over the water; upstream, downstream and across.

We were all keen to see them first – I spotted them with my action man eagle eyes, only fractionally before the boatman and a sense of excitement rippled through the boat as we all stood up and scanned the waters for the tell-tale sign of noses and fins cresting the waves. It was magical, and such a privilege to see what will most likely be the last of these magnificent creatures. 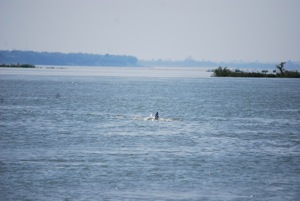 then a pair swimming together

and then a pod of four of them

Always a little too far away for a super photo shot… and then they passed just by the boat and swam off again. Hastily raising the camera, they are so fast and don’t seem to swim in straight lines! However…

And so, blessed with this swim by and marvelling at these amazing animals our boatman signalled it was time to head back and we sped back to the shore grinning from ear to ear, all of us feeling as if we had witnessed something magical and special.

We found our tuk-tuk man and he drove us back along the road to a floating village in the Mekong constructed from wood and bamboo over a section of fast flowing water. This was a place for recreation, to come with the family with a sack of food and drink and to settle down on the water to enjoy some communal time together, and to maybe dive into the water (fully clothed) for some splashing about. We had to pay to get in, and we walked through the floating huts and over a sand dune behind to a quite spot where the boys could strip off and swim naked in the river. I kept some modesty by keeping on boxers.

The water was cool and surprisingly fast flowing – Oskar and I working fairly hard to maintain position in the river, but as it wasn’t deep there wasn’t anything to worry about! 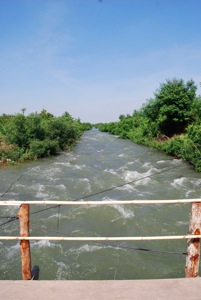 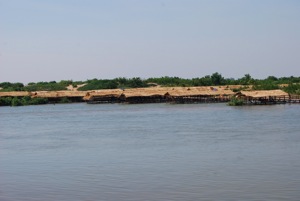 Then after a short wait for the tuk-tuk man to reappear (when we saw the nasty French couple again but studiously ignored them) we carried on along the road, stopping at a temple on the way. We had to climb a few steps to get there, the route lined with monks. At the top of the first flight sat a monk to whom we paid our respects, and to his left a small building with some rather disturbing paintings on them. Then it was up the next two flights to the top where we were rewarded with a nice view over the river, albeit a little obscured by the trees. 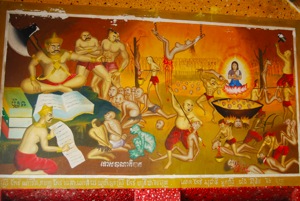 Recovering our tuk-tuk we set off back to the hotel to pack up our rucksacks and prepare for the journey to Phnom Penh the next day – fortunately at a more reasonable hour!

I think its fair to say that we enjoyed both Kompong Cham and Kratie, and the memory of seeing the dolphins swimming free in the Mekong will be with us for a long long time.

This entry was posted on February 16, 2012, 12:57 pm and is filed under Cambodia, Jon. You can follow any responses to this entry through RSS 2.0. You can skip to the end and leave a response. Pinging is currently not allowed.