Phra Nakhon Si Ayutthaya was the capital of Thailand for 417 years. It was founded in 1350 by King U-Thong when the Thais were forced south by their northern neighbours. During the period of being the capital, 33 kings of different dynasties ruled the kingdom until it was sacked by the Burmese in 1767. It has been a UNESCO world heritage site since 13th December 1991, and contains many ancient ruins and art works including the Grand Palace, Chantharakasem Palace and Wang Lang.

We started the day by walking from the hotel to find the tourist information to find a map and some more info on the city. Along the way we saw evidence of the recent flooding from October. On the walls were tide marks that were as tall as Oskar.

We soon arrived at the Ayutthaya Historical Study Centre. It contained various exhibits showing the history of the city, what life was like then, the trade and the relations with other countries such as France, England, Portugal and China. It was an interesting place and a good introduction to Ayutthaya. Afterwards we continued walking to the tourist info where we found a good map and guide book. Just next door was the tourist police station which also rented bicycles. However, they were in a pretty poor state, so we decided to carry on walking.

As we approached an intersection we spied an elephant, bedecked in red and gold walking out of dirt road ahead, his mahout astride his neck and carrying some sightseers on a seat slung across his back. Excitedly we walked on and as we reached the side road we were greeted with the sight of a dozen or so giant beasts gathered around some mounting steps patiently standing whilst their masters chatted together or else ate a snack from one of the ever-present food stands. Like a moth to a flame we were drawn to these magnificent animals, their tiny eyes betraying their quiet intelligence, as they waited for the word from their mahout that it was their turn for a brief walk around the short circuit carrying their load of tourists. 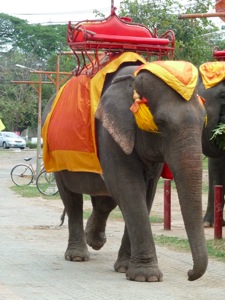 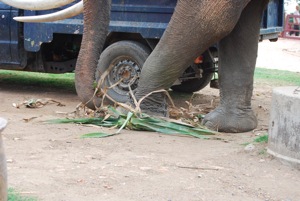 That such a large and powerful, and potentially dangerous, animal could be tamed or subdued by man is a mystery. And yet they are used throughout Africa and Asia to move logs, to drag heavy loads, and to carry people from A to B. Seeing any wild animal tamed or in captivity always evokes a sense of sadness in me and raises questions about the animal’s welfare. To see so many elephants together, chained to various objects (including a truck which bore the scars of previous encounters) was at once magical, but also tinged with melancholy. Perhaps its my fanciful romantic ideal that these creatures belong in the wild and not exploited by man.

Dragging ourselves away from the elephants we followed a path across a bridge where on a small island stood an example of a traditional Thai house. On the way we passed a tree that bore flood markings that were taller than me. The scale of the flooding here was so great it is difficult to imagine, but one gets the idea that building your house on stilts is a good idea! Nearby was some wildlife too, including a bee hive in a tree which looked like it was made from bees. 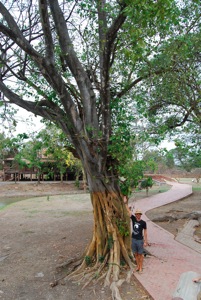 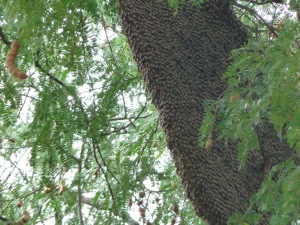 We strolled around a modern temple housing a large golden Buddha before making our way towards the Grand Palace, or Ancient Palace as it is currently known. Within the grounds stands Wat Phra Si Sanphet. The ruins of this important monastery are all that are left, but with some imagination I could not help but wonder at the scale and magnificence of this place. The photos don’t really convey the impression or the sense of grandeur, you have to be there for the full effect! 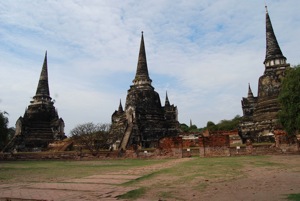 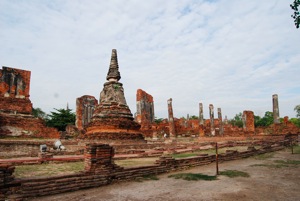 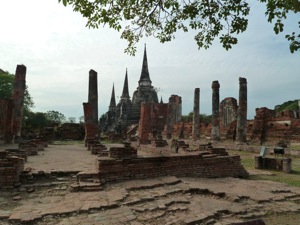 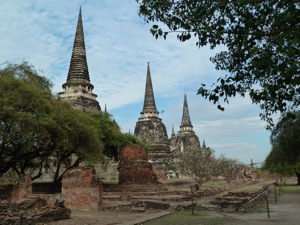 All around the site were two things that stood as reminders; the first, the headless Buddhas, a souvenir of the final sacking of the city by the Burmese; the second, the discolouration of the bricks showing the effects of the recent flooding. Walking around the site was awe inspiring. There was a calm and peaceful feeling and a kind of reverence reserved for cathedrals. The columns and walls were leaning at all angles and some had to be propped up to stop them from collapsing, but I was left with the impression of standing in a place of great size and great beauty.

We left Wat Phra Si Sanphet and walked on. A brief encounter with a cycling tour of sightseers turned our attentions back to bikes and grabbing a tuk-tuk we headed back to the river crossing. We found a place just before the pier and Tania, Oskar and I were soon the proud owners of 3 town bikes kitted out with padded rear seats for Mateo and Luca to enjoy the view from. Then it was back to the house for a swim to wash away the heat of the day, some dinner, and then bed, but not before we had applied for our Cambodia visas online – somewhat of a chore with the slow internet connection, but eventually they went through. Now we just had to wait and see if they would arrive before we departed for Siem Reap on the following Monday!!

This entry was posted on January 23, 2012, 12:26 am and is filed under Jon, Thailand. You can follow any responses to this entry through RSS 2.0. You can skip to the end and leave a response. Pinging is currently not allowed.