Wat Pho and the Reclining Buddha at last

Abandoning the Sky Train and River Boat, we grabbed a Taxi (on the third attempt – no petrol, wrong side of town etc) to take us to the famous temple housing this amazing statue. The driver dropped us across the road from the entrance and we ran the gauntlet of vendors lining the street leading to the entrance.

Stepping through the gate we emerged into a courtyard. To our right the home of the reclining Buddha, and in front and to the left various monuments, statues and temples devoted to early Rama kings. Eschewing the giant statue for now, we bought our tickets and then explored the temple complex. The sensation was not exactly one of calm as there were so many people visiting, but now and again we found ourselves alone with the beauty and at peace as we gazed at the intricate work that had gone into building this place. 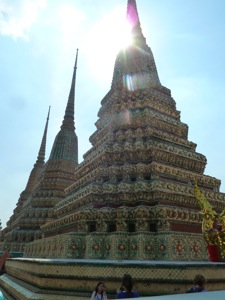 It is an immense site, and also houses a school that teaches Thai massage, as well as accommodation for monks. Temples, stupas and statues; in the centre of the complex, a large cathedral-like temple in whose transepts were two large Buddhas where we once again paid our respects and jingled the fortune-telling sticks until one fell out. 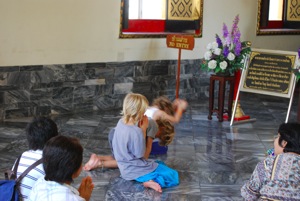 In the cloisters surrounding the three monuments to Rama I, II & III stood (we counted) 160 gold statues of Buddha, repeating in sets of 3 and mostly the same. It was quite something to see a whole wall lined with these beautiful figures, and whats more, it seemed to be largely forgotten by the hoards of tourists visiting the site. Here was a moment where we could experience tranquility.

Returning to the complex proper, we could not help but notice the corporate Chang Water umbrellas and stands that smothered one corner of the site, nor could we escape the booming PA system pumping out Thai music and the odd announcement. Following our ears to the source we discovered a small stage and an audience of parents watching their offspring perform traditional dancing in costume. Monks drifted in and out of the scene, some taking photos here and there. We stopped to watch a while… 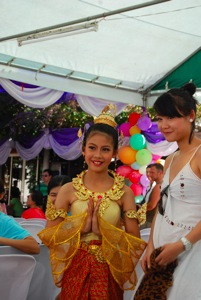 And then it was time to brave the multitude and experience the true highlight of the visit, the reclining Buddha. Leaving our shoes at the entrance we crossed the threshold into an immense hall craning our necks to get the first glimpse of this treasure of Thailand. The Buddha sits in the centre of the hall and reaches from one end to the other, and from the ceiling to the floor. There is no clear view as the columns that support the roof are evenly spaced and restrict a grand vista of the great statue.

Dodging the other tourists who file in and snap a shot and then shuffle off to the other end of the hall to do the same at the foot end, we edged our way towards the head to get an elongated, but uninterrupted view of Buddha. No perfect shot available due to the large host of visitors, most of whom take the photo opportunity and then leave. Here and there, believers paused at small shrines to pray and light incense sticks, but mostly the crowds congregated at either end. 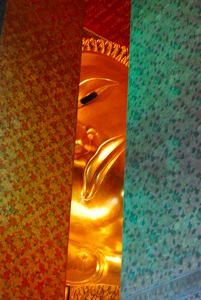 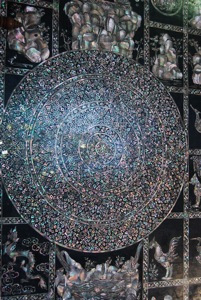 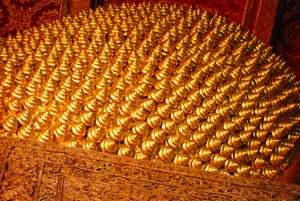 The reclining Buddha is a depiction of the moment when He attained true enlightenment and entered Nirvana. The statue is beautiful, and the feet show scenes of his journey inlaid with mother-of-pearl. Even the detail of the cushion upon which his head rests is exquisite. Knowing the significance of the reclining statue and witnessing this grandeur should have been a spiritual moment for us all. Somehow, it was missing. The conveyor belt of people detracted from the moment and there was no time or place to stop, look and reflect.

Perhaps the Emerald Buddha temple has it right in not allowing photos. It makes the place more about stopping and looking with you eyes, rather than snapping and viewing through the lens of a camera. Or perhaps walking from head to toe and then around the back from toe to head is an act of worship that I don’t understand, a homage that is meaningful to Buddhists, but whose meaning escapes me.

Marvelling at the statue, but disappointed about the spiritual experience, we left the reclining Buddha and Wat Pho. Walking to the river and then up past the outer wall of the Grand Palace, through a street market of trinkets and trash, we arrived at the food market and river boat stop where we had dined a few days before and searched out somewhere and something to eat. Papaya Salad and Chicken with Rice filled our tummies and soon we were back on the street playing the find-a-cab-that-will-take-us-where-we-want-to-go game.

We had wanted to surprise the boys with a trip to the cinema, but it was too late for the last showing by the time we arrived. Disappointment is not a strong enough word to describe how they felt, and so we bought a couple of films. Then it was back to the hotel to splurge a little in front of Cars 2 on the hotel DVD player followed by a street food supper. Satisfaction for the boys at least.

This entry was posted on January 21, 2012, 12:05 pm and is filed under Jon, Thailand. You can follow any responses to this entry through RSS 2.0. You can skip to the end and leave a response. Pinging is currently not allowed.