Early to bed, early to rise. In my case, it was rise quite a few times during the night as various canines connived to keep me slumbering. One pup was definitely whipped by something bigger at one point, which made for a rude awakening. No matter, we had to be up early to catch the bus at 7am and we needed breakfast and to get the mossie nets down and to finalise the packing. The nice man from Gandra House who had kindly bought the tickets for us the previous evening came to fetch us at the appointed hour and shepherded us to Monkey Forest Road where we waited with four other people. Soon enough, the bus driver arrived, checked our tickets and beckoned us to follow him. Expecting a large luxury coach, we were sorely disappointed when we arrived at yet another minivan – though this one was at least in a road-worthy state. Loading up all of the assorted backpacks and one lady’s suitcase! We got on board and were on our way.

After a rather uneventful trip, but passing by some gorgeous scenery we arrived at the busy and bustling port of Padangbai. Well, actually what we got was a kind of dusty car park surrounded by ramshackle cafes and shops into which backpackers and travellers were deposited and left pretty much to themselves with just a “Next ferry 10am”. So, occupying ourselves with our first coffee for a week, we read the guide and chatted with some fellow travellers from France to pass the time. Suddenly there was a flurry of activity and men arrived crying “Fast Boat” and “Slow boat” and then with a “Follow me” they were off before we’d even got out of our seats. Loading up our packs we set off in pursuit. One of the locals kindly offered to carry Tania’s rucksack and led us to the ferry and on board. Strangely enough, he then asked for some money…. quelle surprise!

The ferry had two passenger decks and a lorry deck below. All of the Indonesian people took the lower deck, and all the backpackers the upper. There was little wind so it was hot and close, but at least it was covered and we were protected from the sun. The boys whiled away the four hour crossing with their DS/DSi/PSP and the odd game of Uno with us, and we chatted to another French couple sat beside us and generally watched Bali recede into the distance.

Ere long we pulled into Lembar harbour, another unremarkable port, and duly disembarked onto the quayside. Find the man waving the PT something or other tickets in order to get the bus to Senggigi we had been told, and it wasn’t too hard to spot him. We were told to wait “over there” and were joined by another 8 passengers all bound for Senggigi. Minivans again, and when I counted there were only 10 seats plus the driver. We’re going to need a bigger bus. Ah but no! You (that is us) go on the back seat, and then everyone else squeeze up. Duly sardined into the bus we set off for the hour and a half trip to Senggigi. Now it is a feature of resorts everywhere that money should be made at every opportunity, and if there are no opportunities, manufacture them! So half way into the journey the bus stopped at the PT Whatever outpost and the staff then attempted to entice us to buy more trips etc. Politely declining, one and all, we climbed aboard and were once again on our way. 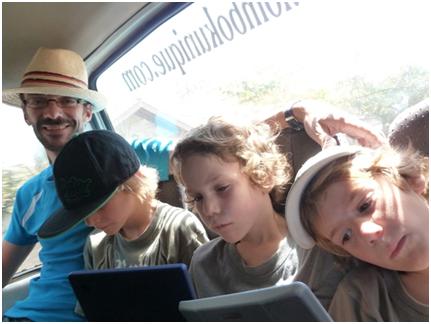 After another 20 mins we arrived in Senggigi just outside the Tourist Office. After some confusion, the driver offered to drive us to our accommodation (Sonya Homestay) which was more or less opposite where we had stopped. Unloading, we were greeted warmly and after some discussion during which it became clear that the family room was not available, we were shown to two adjacent rooms. The usual basic dwelling consisting of a bedroom and bathroom, but we did at least have mosquito nets and a fan even if there were gaps in them and in the screens plugging the holes in the walls. No flushing toilet or wash hand basin, and a tube sticking out of the wall for the shower – luxury, sheer luxury. But, there was the promise of banana pancakes for breakfast again – did we take a wrong turn somewhere and end up in the Bahamas?

As it was still only 3pm we settled in quickly and got our swimming stuff together to get to the beach. Senggigi is white sands and surf, and the place we picked for our first dip was certainly not paradise. Buffeted by the waves, dragged by the undertow and scraped and scratched by the rocks lurking beneath the sand-clouded water did not make for a happy experience. And so we did not tarry, and to make up for the day’s trials and tribulations, Tania and I decided to take the boys to an Italian by the beach that we had espied that did Pizza in a real wood fired oven.

Home, shower, dress and off to the restaurant. They were so happy to part-take of something familiar, and extremely tasty – and plates cleared we sauntered home to bed contented and happy. New day, new island, new adventures to follow.

This entry was posted on September 26, 2011, 11:00 am and is filed under Indonesia, Jon. You can follow any responses to this entry through RSS 2.0. You can leave a response, or trackback from your own site.